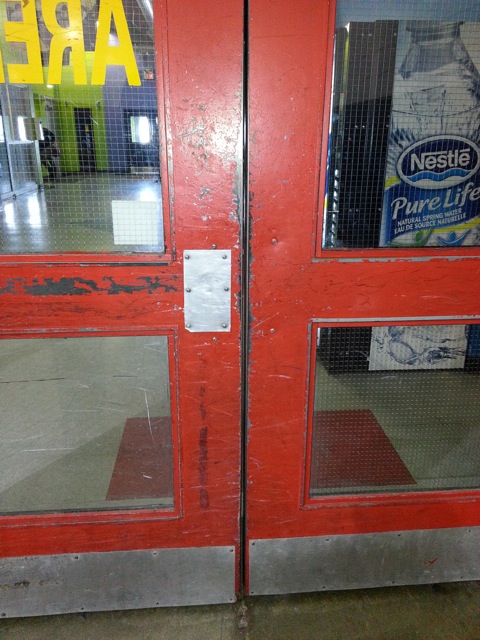 Wired glass breaks more easily than plain glass and should someone fall into it the wires will hold the shards of broken glass in place increasing the severity of the injury. Accidents involving wired glass have led to severe injuries resulting in amputations, paralysis and impaired mobility.

The Ontario School Boards’ Insurance Exchange (OSBIE) says that over 13 years there have been 107 claims against school boards for injuries from unsafe glass.

Laura Rosella, Assistant Professor at the University of Toronto, School of Public Health, estimates that more than 1 person per day gets injured in Canada due to wired glass.

14 year old Jason Hubben of Edmonton paid the ultimate price. He bled to death in his Junior High school after colliding with wired glass.

Wired Glass is being Banned in Canada

The Canadian General Standards Board last revised the standard for wired glass, CAN/CGSB-12.11-M90, in 1990.

Since then, new materials have been developed which are certified safe, eliminating the need for unsafe wired glass.

The building code in the US, the International Building Code, restricted the use of wired glass in 2003 and outright banned it in 2006 from locations with human traffic. Canada periodically updates its Standards and Codes and should also ban wired glass in Canada.

Canadians for Safe Glass has been advocating for the removal of unsafe wired glass from buildings in Canada for years. Building owners are recognizing the liability risk of having  unsafe wired glass in their buildings and are actively removing it now with certified safe alternatives.

The Canadian Glass Association has published a Wired Glass Advisory in 2015 that warns of being sued if you permit the use of wired glass and recommends that wired glass no longer be used in locations subject to human impact.

Finally on November 17, 2016 the CGSB withdrew the national standard for wired glass, CAN/CGSB 12.11. In its place it published a new version of CAN/CGSB 12.1 on Feb 21, 2017 covering all types of Safety Glazing. It does not permit plain wired glass to be called safety glazing anymore and instead outlines the performance criterion for alternates and replacements for wired glass.

The 2020 National Building Code contains changes reflecting the new national standards for Safety Glazing. Wired glass effectively becomes banned under the NBC 2020. It is not safe and should not be used.

Wired glass was historically used as a fire-rated glass. Fire-rated alternatives to wired glass MUST be third party (UL) certified and labelled for use in Canada. Each piece of fire-rated glass must have permanent UL mark on it. If it’s not labeled, it’s not legal.

Accordingly, it is not permitted to apply a surface film to installed wired glass because that modification instantly voids any fire-rating, and creates a fire hazard and liability. The only way filmed wired glass is allowable is when it is manufactured in a factory that is supervised and audited by UL which verifies the materials used and certifies the fire-rating. You can only use filmed wired glass that comes with UL certification and permanent UL marking on the glass.